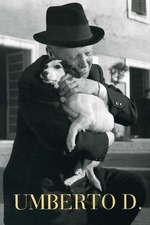 It's a bitter thing to accept that twice at the end of this film, acts of selfishness or selfish motivations indirectly save Umberto's life. Similarly selfish attitudes stand as walls around Umberto as he bounces back and forth, seeking just a little more money or some sort of reprieve. The moment of greatest power seems to come while ill in the hospital, but even that is abetted by others. This lack of power and sea of selfish figures is contrasted by his fellows in poverty and misery, who are beautiful portraits of poverty.

It's a quiet film for the most part (the soundtrack does occasionally put a bit too much of a point on things, but that's a minimal complaint), and the silent stretches where the film soaks in the lives of those struggling through are finely crafted, emotional poems that say so much. The gentle interactions Umberto has, soft failures, affectionate conversations, and painful, awkward moments, are discordant notes that make the silences all the more beautiful. There's pain here, and the ugliness we see (notably, some frank sexism) is naturalistic in a way that neither excuses nor glorifications. They are simply realistic depictions, and that's the strongest part of this film--the neorealistic poetry.