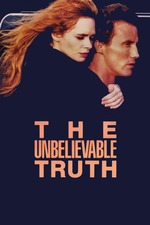 I smiled wide when the overweight, mediocre mechanic pulls out that electric guitar and amateurishly shreds a bit. Partly because I was reminded of a similar non sequitur in Simple Men, but mostly because I think I finally got why it's there. Hartley is simply depicting a pretty perfect example of smalltown America, which is littered with would-be rockstars practicing in odd spots for no reason, quietly observed by smarter, cooler, or wiser heads, but tolerated all the same. This mechanic is repeated a dozen times over in my hometown, and probably in every other part of America.

This is a film about presumption, about smalltown rumors, about appearances, and about atonement. It has the beautiful tone/mood that Hartley had in Simple Men (and, based on these two films, I assume he has in his other work to some degree), and it has the incredibly endearing dialogue, with its stutters and stops and big questions and small moments. It reaches too much sometimes, but mostly, it works perfectly. Barely suppressed rage and defiance leaks through even the most casual conversations, and genuine emotion hides beneath deadpan and strangeness. It's everything I loved about Simple Men, but with a less heavily 90s vibe.