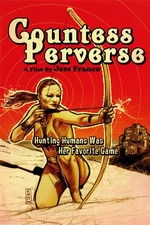 What starts out as a standard Jess Franco film--long sex scenes, close ups of genitals, visually impressive sets--ramps up toward the end as everything sort of begins moving beyond the set up. This film was described as his take on "the most dangerous game," but it takes a bit for that to come into play. It feels almost more like "Bluebeard" or some variation of Countess Bathory for a while, but it all comes together. (The poster over there is probably the best thing about this, but honestly, it's a pretty solid Franco outing.)

Sometimes, I think Jess Franco was a genius. He found a way to make a living staring at beautiful, naked people. Creepy, certainly, and and not really probably without its flaws, but I'm certain it's what he wanted to be doing most of the time (right?). Few people can say they figured it out so well. His good fortune is our misfortune, though, unless you share his predilections. Sure, the sex scenes are fine at the start, but after 45 minutes of it, it's a bit dull.