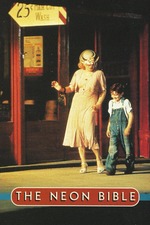 Pop music needs to be elegantly simple. I love something poetic, but a good pop song can't get too complicated or it just gets pretentious. The earliest pop music hewed so close to this simple, straight-forward model that much of it is now heard almost exclusively as children's music. As culture and music evolved, some of the music got complex, some of the production got complex, but the very best of it still provides lyrical excellence with graceful ease. The early works of pop music were perfected by one Stephen Foster, whose "Hard Times Come Again No More" might be the quintessential example of evocative pop with direct, uncomplicated lyrics. It should come as no surprise to most that I suffer from depression, and thus, that song, even in my brightest moments, hits me harder than I feel capable of expressing. In the context of the end of this movie, it manages to top that.

Davies is a master of soundtrack work. His films could be ugly rags, and the soundtracks would carry them into the realm of greatness. He has the temerity to add beautiful, nostalgia-tinged, period-piece hued cinematography to them as well. His performers, especially Rowlands, bring power to their roles if not necessarily a lot of nuance. The film's themes of small town oppression, broken dreams, and heartache all hit the right notes. The only flaw, and it's a big one, is that the dialogue can be a little painfully bad. Just outright awkward at times, unfortunately, which clashes with all of the excellence elsewhere.