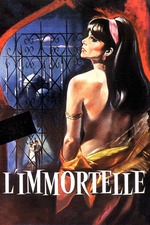 The rhythmic vocal music that starts this film is so lovely. The idea of the voice as an instrument rather than merely a vessel for someone's words is crucial to the very best of music--think opera or the ripping, roaring vocals of gospel or the call-and-response of work songs or the moan of a bluesman or Meredith Monk--and these (presumably Turkish) vocal somersaults that accompany this film's opening sequences are a prime example of that. They are the whole of the music here, and it draws the attention of the viewer instantly.

What follows is a fairly typical for Robbe-Grillet excursion into dreams and memories that is difficult to entirely parse on a direct narrative level. A woman appears and disappears, a man seeks her, perhaps they find each other. Throughout the film, we are reminded of the language barrier between them and the people around them, about the difficulty in communicating. This is exacerbated by the mysterious nature of the woman and the suddenness of her arrival and departure, never quite allowing enough time for things to be explained.

The film uses this gulf between people to suggest, perhaps, that our connections are based on impressions, our memories are deceptive, and our understanding of each other is flawed. It's not necessarily saying that love, especially of the fleeting kind shown, is superficial, but that the power of our feelings for one another aren't necessarily based on something so feeble as language. Robbe-Grillet clearly has a respect for dreams and images and bodies, and this film neatly depicts how profound they can be.