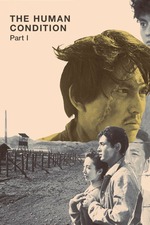 The Human Condition I: No Greater Love 1959

I feel like there's an adage that sums this up. Something about being a good man in a bad world. I can't think of it now. Maybe it's not an adage; maybe it's just a Terry Pratchett quote. Regardless, this film is painfully bleak a depiction of the noble struggle, and the concept of a good man fighting within a dirty, broken, ignoble, violent, oppressive regime for even a fraction of compassion is one that resonates, even if I am not a fraction of the human being Kaji is. Every facet described there--the concept, the resonance, and the fact that I am not worthy--makes this film all the more scathing, difficult, and powerful.

This nigh futile effort is repeatedly shown as Kaji walks through huge landscapes, a small, insignificant speck among huge forces. It's shown as he stands at the barbed wire barrier, seeming as much a prisoner as the POWs. It's shown in the frustration etched into his face. His few triumphs are all poisoned by the fact that they are triumphs for a system that he is fundamentally opposed to; he serves two masters. One master is his own conscience; the other master is his nation/company. He seeks a way forward that benefits both, but all this earns him is contempt from both sides. The prisoners do not trust him, and his superiors and associates have disdain for him.

I can't say where this is going, but I cannot fathom what comes next is any happier. If the next film picks up where this one left off, Kaji's pacifism will be as tested as his socialism was in this one. I will come to it soon enough.