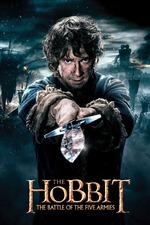 The Hobbit: The Battle of the Five Armies 2014

When I was in second grade, I watched the animated The Hobbit film. Shortly thereafter, my father surprised me by revealing that it was based on a book. I recall vividly being a bit confused about the Beornings in the book and not the movie, and the sense of fairytale/just so story that pervaded it. I recall being so excited about it and begging my dad, as soon as I learned there was more, for the next books (he waited a few years). I also remember that I learned about the other books by asking him about the conversation between Bilbo and Gandalf at the end. At such a young age, subtlety was probably a new concept to me, but I definitely picked up that Tolkien was hinting at Gandalf's knowledge rather than spelling it out. After rereading the novel later, multiple times, as I grew up, I appreciated that moment on different levels. First as the way that it characterized Gandalf. Second for the way it hinted at so much more to the world of Middle-Earth. Third for the way it had a child-like poetry to it (and a pun). Fourth, eventually, for the realization that that was what truly lead not just to finding a lifelong love of fantasy and bonding with my dad.

Once upon a time, I was excited for the Lord of the Rings movies. I looked forward to seeing them with my dad. I don't recall entirely if I watched all three with him, but we watched some of them together. It was, to say the least, disappointing. I made a few excuses early on about their quality, but in retrospect, they were glutted, ugly extravaganzas that lacked the spirit and atmosphere of the books. When the first Hobbit film came out, or shortly before, my mom told me that my dad thought I didn't like him. I did not know then and don't know now how he got that idea. As best I can tell, he misinterpreted something I said on the phone to a friend, thinking I was speaking to him. Without directly addressing whatever it is he thought, I simply asked him to go see the film with me. I don't know if I convinced him he was wrong--we certainly didn't talk about it--but over the last three years, we've made it a Christmas tradition to see these films. The first one, I was nervous, and afterward, I was hesitant to unleash my contempt for the film, but he started in on it. The next year, I was more open--I asked him to go hatewatch it with me. This year, we were mocking it before we even arrived. Given that I am not remotely out to this man, it's nice to have an opportunity to interact with him that I can forget about all of that.

So, sure, in a way, it's fine. These movies served a purpose. Two old, overly rusty Tolkien geeks went in and bonded over how much we fucking hated these things. The best I can say for this film is that it was marginally better than the previous one, in that it eschewed cartoonery. It did not replace that lack of silliness with anything worthwhile, however. You can read almost any review to find out about how it's overlong, drawn out, substanceless, and inaccurate, and I'm sure there are thousands (millions?) who have a personal connection to these stories. But I still have a personal connection all the same, and thus, it's a bitter disappointment that these were so offensively bad.

Just to get it off my chest, here are a few of the crimes this film commits: invented characters take up most of the screen time; dialogue that is excruciating; a lack of confidence in the actors that requires the director to over-produce everything; bad, ugly CGI; the most pointless dragon ever (how is that even possible?); and that goddamned ice-battle that was just plain insulting. Oh, and as a friend pointed out, it's the third cash-grab film based on a book with powerful anti-greed themes.

But mostly, it's that final conversation between Biblo and Gandalf. That lovely little interaction that lead to something that means so much to me, that Peter Jackson just royally fucked for no sane reason whatsoever. He removed the subtlety in favor of spelling it out bluntly, which is as good a metaphor for his storytelling methods as any. He crammed these films full of garbage, ignoring everything magical about them, in favor of his ugly movie "magic," and spoiled even the smallest moments.

P.S. The Tall Dwarfs are a New Zealish rock band that I quite like, and I get that maybe Peter Jackson is paying homage to them by featuring 8' tall warriors as dwarves, but it seems out of place.