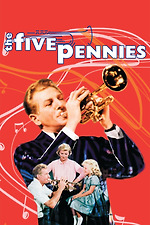 Having grown up on White Christmas, I adore Danny Kaye. Light-footed, expressive, and a comedic expert, he's a classic sort of star, a song-and-dance guy who can bring a touch of acting to the table. He's a bit hammy, but mostly within a decent limit, and when he decides to step it back, he can manage well enough. But he's at his best when he's performing, going all out in song, dance (esp. dance), and those silly impressions and facial expressions. See "Choreography" from White Christmas for a fine example.

This film is essentially a showcase for him for about half the run, and a showcase for Red Nichols' playing for the other half (intermixed well). You can tell it's designed this way because in every scene Kaye/Nichols' playing shares with Satchmo, the film carefully positions Satchmo and his performance. It's clear that if Satchmo wanted, he could blow the roof off the studio. It's clear he's kinda holding back, even in his old age. So Kaye can shine, and Nichols' playing can shine, and Satchmo's bright sun of a horn won't blot them out.

That's fair. Satchmo, at this point, was a big fucking deal. Sure, he was never given the due he truly deserved (there's not enough due in the world--and I'm not even his biggest fan or anything). An airport and a park aren't even enough.

Anyway, the film. The film is a feelgood story featuring a little girl who's not quite great, but sufficient to fill the part. It features Kaye nailing it, and Barbara Bel Geddes giving a solid performance. It's a fairly sweet, mostly true story, that shows the changing tides of popular music, the value of family, and the power of performance all in one go. It's not quite as stacked as it could be, but it references the greatest and has some solid performances--even if they're a little watered down sometimes. It's a musical before it's a biopic, really.