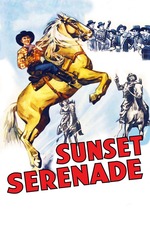 It occurred to me that if I watched enough of these, maybe my most watched actor of the year might be Trigger. Unfortunately, I don't think I have that many more of these. Also, I won't look it up, but I can't imagine they got the horse to whinny on command gently. Like every other Roy Rogers film I've ever seen, this one is about him saving someone from losing their land. There's something both charming about it (as he is defending the weak, poor, or underprivileged) and sad (as he is defending property). They're careful to make it such that he's usually defending very good people (in this case, a person who takes care of babies). He had a solid PR machine going for him. Other things I'm not going to look up: what he was like off screen.

The best part of any of these Roy Rogers films is always the singing. The Sons of the Pioneers have that sweet high harmony that I probably mentioned before, but it really is beautiful music from these genteel cowboys. In this one, and others, Gabby joins in with a surprisingly strong voice for a few tunes, including a lively Irish-inspired one bizarrely sung over the unconscious form of a man Roy just laid out. Musicals tend to push the limits of plausibility with their genre-defining sequences, but this one stood out a bit.