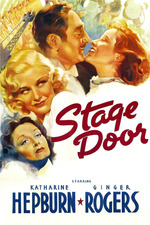 In a movie with Katharine Hepburn and Ginger Rogers headlining, it's impressive if you get better lines than they do. Granted, everyone in this movie gets amazing lines. There's so much dialogue I had trouble keeping up and the subtitles (I always use subtitles if I can) swam by at an alarming rate. The rest of the cast includes Lucille Ball (whom I didn't recognize at first) and Ann Miller before they were huge, and Eve Arden, Gail Patrick, Andrea Leeds, and more. Ball and Arden are relentless snark machines that provided some of the best supporting humor I can think of.

The film itself is the story of a group of aspiring, out-of-work, or otherwise struggling actresses and show business women living in a boarding house. Hepburn is the new girl in town, and she provides the central conflicts, directly or indirectly. She's not quite fully the straight woman, but she's certainly the closest one, I think. This implies that this is a comedy, but it's very much not. It has a light-hearted tone with a heart of steel underneath. The banter is omnipresent and often hilarious, but there's bite to it--not necessarily directed at those it is exchanged with, but rather, with the world at large, at the Depression, at show business, at life.

And then, suddenly, it becomes a tragedy. It's not entirely unexpected if you're aware of what you're getting into, but if you let the tone distract you, it might well be a surprise. Still, it's one of the more amazing sequences of the film, and it sets up the dramatic and moving climax. It allows Hepburn to deliver one of the most scathing and beautiful speeches directed at Hollywood in a Hollywood film, and it unveils the ugly side of show business in a huge but indirect manner.

This is a new favorite.