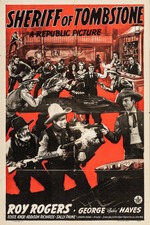 This actually seemed like a combination of the previous two Westerns--Roy Rogers and Gabby H. in a mistaken identity plot. With Rogers along, the songs are better. There's always a kid, too. This time, a corrupt mayor is trying to steal someone's land or something (I admit, these kinda blurred together, and I only watched three). Notably, this film didn't really dig into the main myths/stories of Tombstone, but just used it as a generic Western location.

The best moment, other than some of the rather lovely songs, was Gabby being a lawyer. He didn't really have a moment in which he acted as one, but he certainly made the claim a few times. He's not generally my kind of comedian, but his corny demeanor is a bit charming. The running joke about his avoiding his mother (I think? bad sound quality and no subtitles is a rough outing) didn't really work, but obviously, it wasn't delivered from a good quality print.