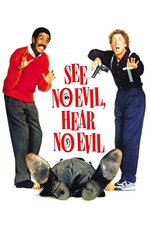 I'm guessing there's enough in this film to bury it with people concerned with the dignity of the blind and deaf, but I was surprised (and I am able-bodied enough not to claim any expertise here) at how most of the jokes landed without being at the expense of either character's physical limitations. In fact, most of the jokes seemed to be about the perceptions people have about this or the foolishness of people who interact poorly with the deaf and the blind.

Some of what happens is a touch predictable, but they mostly make it work. Notably, the driving sequence is superb. Wilder's terrified exasperation plays perfectly against Pryor's ramped up mugging, culminating in the inevitable ending. On the other hand, there's a rather offensive moment when Richard Pryor feels up a woman against her will, so it's not without some rather ugly flaws even if they seem to sidestep the most obvious pitfalls.