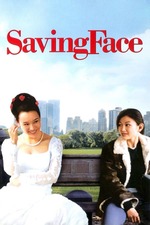 It's at worst misogynist and at best boring.

This movie is cute, and it's absolutely perfect for being cute.

The careful storytelling and foreshadowing (Young Yu at the subway station, for instance) and characterization (Gao's arc is a masterpiece) and of course the cinematography. Watch the way it shoots Gao when she's insecure. Note how it amplifies her emotional state. Note how it blends performance and composition. Watch how it uses every simple little trick (big airport space, crowded ballrooms, cold hospital lighting, funny little dating montages--the parallels between Wil's and Gao's dating lives is perfectly done). Note that it's done sincerely. Note that it's stripped clear of the macho bullshit and patriarchal values--it depicts them without condoning them. It critiques the values without denigrating the culture.

It takes the format of the romcom and it uses it. It doesn't adhere to it in some tired way; it uses the tools that come with the genre to tell a compelling story. This is a perfect genre film. This is a sweet, cute lesbian romcom. It's not white; it's not toxic; it's not even assimilationist. Though it doesn't embrace radical queer iconography, it certainly doesn't suggest Vivian and Wil become "normal." Rather, it defies those who scorn their love and takes up their space.

This deserves far more credit than the dismissive tone you use when you call it "cute." "Cute" is tone most filmmakers fail at. This one succeeds and wields it to express something meaningful and evocative and warm.