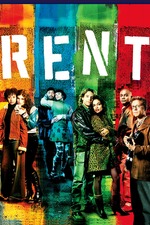 My first exposure to this musical was as a clueless, closeted teenager in the car of a school acquaintance who was taking me to some school event. She was talking about how much she loved the musical. The song was "La Vie Boheme." I had no idea what I was hearing, no context for it. In retrospect, this might have been the first time I ever heard of ACT UP, which is a deep condemnation of the capitalist education system. I ended up hearing a lot of the soundtrack from her, and in college, would occasionally listen to bits of it that stuck with me. It would not be til much later, probably in 2009 or so, that I saw this movie for the first time.

It was a surreal experience.

Let's start with Angel. Angel is someone who seems to exist at the border between trans woman and drag queen; she seems to live as a woman, mostly. But she's called a drag queen, doesn't hesitate to take off her wig, and dates a man who identifies as gay. This is a reflection of the lack of consciousness around trans identities that generally existed in the world around the time this was made and a flaw in the writing, which I will address later. Becuase of this, watching this while deep in self-repression was agonizing in some ways. Seeing someone close but not quite to something I could identify with hurt. It left me sour on this for a long time. It also made every scene with Angel hit pretty hard.

Oddly, I more related to Mimi. I could not be further from Mimi in most ways, but just the lines "they used to tie you up" were enough for me to see something I wanted to be in her (a very pretty sub--mission accomplished). Decades later, it would turn out I am neither an Angel nor a Mimi but a Joann, according to my friends. I hope more of a play-Joann than a movie-Joann.

The point is that this is one of those rare queer pieces to hit the mainstream that, while massively watered down and flawed, still had just enough queerness in it to break through the miasma the closet turned my brain into. There was something there. But it wasn't enough; I didn't like the experience at the time.

Now, in 2020, revisiting through videochat with some beautiful queer friends, with more skill at film criticism, with class consciousness, with a greater awareness of my queer self and of queer history, this film both works better and worse. It's better because I understand Angel better; her story hits harder. It makes it clear that this should have been Angel and Tom's story. His sexuality does not define her, nor does her ambiguous gender defines his sexuality. This is just how queer relationships end up sometimes. The boundaries blur and we get to love each other without the capitalist patriarchy telling us who we fucking are.

The parts of the film/musical that resonate stand out better: the sense of desperation, the artistic struggle against "selling out," and the messy Sapphic relationship all make sense, even if they aren't portrayed as adeptly as they should be. You can see the hints in there of a powerful narrative, though, and there are moments that reveal the emotional depths this could have had. The "Life Support"/"Will I?" scene should have been turned into the full feature; maybe not even that, maybe just the line "Reason says I should have died three years ago." Actually exploring that sentiment on camera, in depth, through character development, would have been amazing. Instead, we get... something truncated.

None of the characters are allowed to develop, to be deeper than a song or two. Musicals are capable of more than this. This is the flaw in the writing that underserves Angel so heavily. So much of the plot happens off camera that we don't get to see the characters interact with it. We hear them sing and tell us about it later; we see references to it. The bonds Angel formed with the other characters is lost as we spend more time listening to Mark and Roger whine. Tom is there to basically be a wounded black man guiding these two asshole white bous. Mimi similarly doesn't get to be a real character; Maureen and Joann exist only to fight with each other, it seems.

Like so many mainstream queer pieces, the film centers the straight, white characters. We get Mark and Roger. Two white guys. Two pawns of gentrification living free in a space owned by their former friend who married into the gentrifier class. Mark is a prick, a privileged jerk who invades other peoples' spaces, makes things about himself, and derails the whole narrative. The entire story would work without him; his film at the end is supposedly inspired by Angel but just... has no value. The narrative uses Angel up for his inspiration, and he squanders it on that. Perhaps the stage version is better.

Roger has a similar role, treating Mimi like shit. Note the slight mockery in his voice as he realizes where she works and what her act is--with no acknowledgment that to know that, he had to be a patron. Note the way he rejects her when she shows up in his apartment, and note the way he never really apologizes. His struggles with revealing his status do not justify this. In the end, he abandons her to the richer predator Benny, runs off to Santa Fe, and spends the whole time moping about her, devouring her pain as his muse. When he comes back, the payoff is a song worse than the song about how he wanted to write a great song.

Making the central, recurring motif of the story "rent" unfortunately serves to reemphasize over and over again their role in the narrative as part of the gentrification process. At least in the stage version, the scene where the houseless woman calls out Mark is a whole song, if I recall correctly. In the film, it's one small moment that never really gets followed up on. Meanwhile, Tom, Angel, and Mimi are struggling to get by, but we never get to see or feel it. They exist to pop in and hand money they lucked into to Mark and Roger or exist in a limbo of suffering just outside of Roger's orbit. They exist to serve the white, straight narrative.

Similarly, Maureen's protest is given a scornful treatment within the narrative in two ways. One is by the unreliable, unrelatable source of Benny, the rich black gentrifier. The other is by the general response to her by most of the other characters (even Joann), which presents her as a mess of a human being. The latter is both one of the realest representations of a queer person ever (yes I am exaggerating for the sake of humor don't take that seriously) and at least somewhat effective as a counter-balance to her obnoxious privilege--until her obnoxious privilege is presented as an effective form of protest. If this were a realistic narrative, a lot of vulnerable people would have been endangered and hurt by her antics.

Her relationship with Joann, as my friend who is more familiar with the stage version pointed out, is watered down in the film, apparently. There's no commitment ceremony in the stage play, but they did cut a kinky, queer sex montage from the film. Thanks, Hollywood, for making this even more sanitized than it already was. Which is, of course, another major point against it: it is a sanitized version of the "Bohemian" lifestyle. We hear songs and see a few moments of violence, a reference here to piss on the stoop, complaints there about heat, but it's all informed suffering. Roger's hardships are shown as angst, not pain, watering down what could have been more evocative; Mark's are just whining. And our better characters remain in their shadows.

Yet. Still. If you took a shake of Maureen's messiness, a touch of Mimi's personal struggles, Roger's regrets, Tom's loving presence, and Angel's spirit, if you took all those and made one character out of them, you'd have a great queer character. The combination of those with the shallow references to "Bohemian" life and the more real, more urgent struggle of those living with HIV/AIDS in 1989/90 give it just enough queer fringe energy to make it feel appealing, eye-opening to a closeted kid in smalltown Alabama with no exposure to these worlds. Watched through the eyes of someone who finally understands what I felt when I first experienced this, it has much more impact.