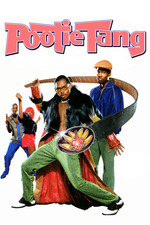 As far as fictional languages go, the bizarre tongue spoken by Pootie Tang and inexplicably understood by those around him might be my favorite. It has surprising consistency, a rhythm that is hypnotic, and it's both a way for the writers to put slang into the mouth of their hero without being offensive or outdated and a way to gently nudge the blaxploitation films being homaged/lampooned here. Plus, it sounds cool.

My main problems with these films are in its portrayal of women and its conceit with the belt. Even if both of these things are rooted in the deconstruction of blaxploitation, they muddle any present critique. The portrayal of women is either a plot point or some tired femme fatale trope escalated to eleven. Wanda Sykes' Biggie Shorty is the only female character portrayed with presence or agency, but even she's just out to get a man. The belt is... more or less an extended child abuse joke. I get the joke they're making, but I just think it could have been more effectively made.

Otherwise, it's a fun, strange blaxploitation messiah story that has a decent anti-corporate message. It's subversive and vicious, and it has some solid jokes, especially some choice running jokes. It also has good running jokes.