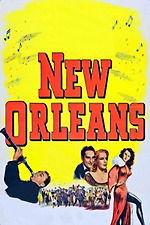 I moved to New Orleans in 2000 to go to school. I could have gone a lot of places, but Tulane offered me a scholarship and the city had an allure to me that I could not put a finger on. It would be a long time living here before I really figured it out; I spent my first few years focused on Uptown more than anything else. I spent a decade living in Uptown, and I already feel nostalgic when I find myself there. It's a weird feeling. Anyway, the first thing that made me love New Orleans was the fact that it was not Cullman, AL. I was more or less accepted; I could walk down the street in any guise I wanted and few would bat an eye at me. I wasn't anonymous; I wasn't ignored. People'd say hello. I wasn't hated. I just was.

There are people here who will never consider me a New Orleanian, because I wasn't born and raised here. That's fair. There's a lot that I have never experienced. But I feel at home in New Orleans anyway, and I cannot imagine living anywhere else. I am comfortable here, and that's not something I can say about most places, people, or things. I am not a comfortable person. Because of my love of this city, anything to do with it has to walk a fine line. People here are protective of the city and portrayals thereof. We can laugh at the bad shit like K-Ville, and we can nitpick the better stuff like Treme. It's a weird city with a lot of its own traditions, some of them better known than others.

Which is all to say that naming your movie New Orleans is setting a hard standard to meet. Proposing to tell the tale of jazz and Storyville, well, that's a lot to tackle. No film could really do it. It's too big, too important. Jazz is cherished here, in a roundabout way. As the film depicts, its history in the city was not always without conflict. Racial tensions played an important part in the development of the music, and that is very underplayed (though subtly hinted at and illustrated outright at the end, though probably unintentionally and not in a good way*). New Orleans is a city of conflict; it's as much at war with its own history and culture as it is embracing it. It thrives on tourism, but tourism calls for watering down its best features. The death of Storyville is not a bad symbol of that fight.

The way the film is structured allows it to avoid many of the authenticity pitfalls. It focuses on one club and one mansion in the city. There's few scenes outside of these two spots, and that allows the film to avoid a misstep in depicting other parts of the city. At the time it was made, I wonder if that was a concern or not. It feels like a more modern worry. Anyway, it's not really a major problem, as the story it tells is a bit of a Hollywood version of the birth of jazz. It has the obligatory love story, a build up to assimilation, and a sort of pastiche of history. It's not wholly wrong (well...); it just leaves out almost all of the gritty details.

And then there's the music. My god. Forget the half-opera version of "Do You Know What It Means..." Forget that Billie Holiday wasn't from New Orleans. Her version of "Do You Know What It Means..." is so filled with melancholy that she might have been the embodiment of the city. And then there's Satchmo doing "I Thought I Heard Buddy Bolden Say." Or Meade Lux Lewis slamming the piano. Kid Fucking Ory. This is a stacked cast, even if they're just musicians in the background. On the basis of the songs alone, this is a perfect film. If only they had gone the Stormy Weather route and just let them be the showcase.

* Not many black faces on that stage at the end, is what I'm saying.