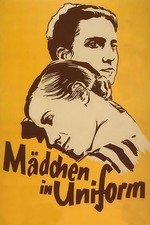 "You were only first aware that they were Jewish when fascism was there and you lost your friends." - Hertha Thiele

The previous decade was remarkably progressive for LGBTQ struggle in Germany--because of the activism and hard work of too many to name--but by 1931, the writing was on the wall. Between the economic crisis and the growing political strength of the right wing (buoyed by the democratic socialists' betrayal of the working class), queer people, trans people, and every oppressed group in Germany knew things were going to get so much worse.

This film, in some ways, comes across as a plea. It depicts queer love, a schoolgirl crush on her teacher, as innocent, as something normal. It shows the schoolgirls without the restrictions of the rules and guidelines of heterosexual society--dancing together, hugging, cuddling, touching, sharing platonic but physical and emotional intimacy--as an idealized display of love. No man appears in this film; this is a movie about the communal love of women as much as it is about the queer crush at the heart of the drama.

It shows a world almost none of us get to experience, and it lingers on it. Then the real world comes crashing in, and the film uses the conflict not to bemoan our fate, not to denigrate us, not to denounce the fantasy, but to plea for it and to show the strength we have. The students answer the attempts to divide them with a show of love and solidarity that brings tears to my eyes every time.

And that's the real answer. The quote above illustrates the shared plight of all those affected by the violent repression/oppression inflicted upon us by the Nazis. If you were queer, trans, Jewish, Romani, disabled, a labor organizer, a communist, Slavic, etc. and had the option to hide who you were, you faced a choice: defiantly stand up and face near certain death or build yourself a metaphorical or literal closet to hide in. They all faced the same terror.

The Nazis were methodical, thorough, ruthless; the closet provided no surety of survival. But that--or fleeing--was the only recourse for far too many. Without a united, powerful mass movement to oppose the fascists, the oppressed did what they could to survive. Those that organized (the greatest heroes of the war) did so under the most difficult positions, and their fight was not in vain. But they survived, they won, because of the international solidarity of the working class (not the least of which, of course, were the Soviet Red Army, whose inspiring might spelled the end for the Nazis).

There is no Soviet Red Army to sweep in at Manuela's school, but the school is inspired not by a Nazi regime but the Prussian school system. A bitter, cruel, oppressive system, it inspired the writer and filmmakers because it served to address rising attitudes at the time. The story takes pains to show the kindness and caring among the students, their adoration for the one teacher who treats them as equals, and the simple compassion that contrasts that system.

It takes pains to depict them not as perverse (not that there's anything wrong with many kinds of perversity...), not as pedophilic (there is something wrong with all kinds of pedophilia), not as evil, not as a source of misery, not as a source of humiliation, but as something natural and innocent. It is a celebration of the many loves between women, and it scorns the competitive (Marga) and the divisive (the Headmistress). It is shown as motherly (Frau Bernberg), sisterly (Ilse), and queer (Manuela). It shows no judgment for love; it despises cruelty and control. And in the end, it hinges on solidarity.

Today, we face wave after wave of attacks on the working class and the oppressed people. Whether it is the immigrant concentration camps, the murder of Black people by the police, the anti-Semitic terrorism, the stripping of reproductive rights, the destruction of workers' rights, the assaults on LGBTQ rights, imperialist war, genocide in Yemen, right-wing U.S.-backed coups in Bolivia, or just the every day tribulations of wage-slavery, we all face the same terror. Whether your neighbor is a leading organizer or a backward bourgeois-poisoned bigot, as long as they are working class or oppressed, they deserve you solidarity in the face of this terror.

This film is not a Marxist call to action, but it is a resonant depiction of resistance in the face of abusive, controlling, arrogant power. It shows the depths of love required to face that.

And it's unapologetically queer. Every close up is an adoring portrait of a woman's face, letting her emotions seep through the silver screen. Every touch, dance, caress, or kiss is a not-so-subtle message to every queer woman watching this film: it's okay, you're not alone, this is beautiful, this is pure, this is kindness. To create this in the face of rising fascism is an act of defiance no less than Manuela's drunken declaration, no less than Frau Bernberg's dressing down of the Headmistress, no less than the students' uprising to save Manuela. It is an act of love.

Racing with the Moon