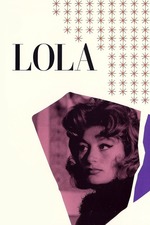 The third Demy film I've seen, this one has all the sweetness Umbrellas and Rochefort had, but without the colorful spectacle. It's still a visually appealing film, but I have to admit, I was slightly disappointed that it was in black-and-white (a very odd feeling; I do so love black-and-white). Demy is simply too good with color. Still, the film is visually lovely. The great crowds, the rolling view of sailors in the streets, Lola's dance sequence, the pleasing strolls, they're all lovely to watch.

The story is a simple tale of passions. Here the subversion is that Lola is not a reward for anyone. The two men we see actively pursuing her are not entirely without flaw in their regard for her, but neither reacts to rejection with possessive venom. While I have mixed feelings about how the film ends, the fact is, there's ample reason to believe this is entirely what Lola wants. That's a respectable ending, especially in the era this was made.

There's some theme going on with the young Cecile, a commentary on generational differences or the innocence of youth or just a window into the past, but what struck me instead was that she was apparently interested in a science fiction story (comic book?). It sounded like a good one, too. I really wanted to know more about it.