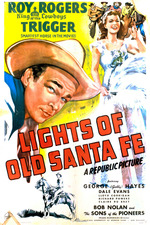 I have to admit, I began to worry at the number of times women were cast in the villain roles in these films. I'm sure it was an ugly trend, but the this one bucked the trend. The villain is a rival showman, and the whole film focuses on a rodeo show. It's their own skins they're trying to save in this film, which is a slight variation on the theme. There's a little about helping out the Brooks troupe, but it's mostly about getting employment for Roy and the Sons of the Pioneers amid trouble for everyone.

I was a little disappointed that after a few decent performances early on, the big finale performance was sidestepped to a degree. Not only that, but the penultimate one, the one in Albuquerque, is entirely avoided. These films don't have a lot of meat to them, so the promise of spectacle was a bit welcome. It's not that it didn't deliver, just not as much as I had hoped.

Still, the music was a bit better in this one. The title song is a lovely, melancholy-tinged performance that Rogers nails, and the Sons being cast as performers gives more excuses for them to do just that.