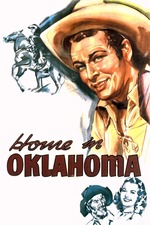 (The Adventures of Robin Hood (1985) is not in Letterboxd's database, so I am reviewing it here along with this old Roy Rogers Western that i watched.)

The animation in this cartoon obscurity is halfway decent, halfway awful. The designs of the characters tend to be almost good, as if a little more work could make them striking. They are softly angular, distinct figures, but too stiff. The stiffness is the biggest flaw here, as their movements are neither realistic nor cartoonish; just awkward. The backgrounds were mostly dull as well.

What the film gets right is a slightly more active Marian and a strong appearance from King Richard, wherein he has more to do than merely show up. Still, it's mostly a rehash of the most common Robin Hood stories (the archery tournament, blah). All in all, a mediocre Robin Hood outing with some promise.

Roy Rogers could sing. I love the old singing cowboys, and I love the high harmonies of the Sons of the Pioneers. Their movies are pure fluff, light entertainments with a song here and there, a basic plot that could fit into any sort of film, and some horse-riding. The plus side is that Dale has a strong presence in this one, meaning she has some agency and intellect, even if she gets the short end of the stick as far as her battle of wits with Roy Rogers goes. In the end, they're both on the same team, anyway.

As I watched a handful of these old Westerns today, it struck me that these really were the precursors to television. They weren't serialized, but they banked on recognizable stars whose personas would not change from film to film, and there's a quick-and-easy air to them that would work well in television. Watching films like these would be no more taxing than an episode of your standard network broadcast.