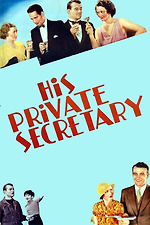 These old John Wayne bargain bin films I have are in even worse shape than the Roy Rogers ones. This one looks like someone just bleached the film before transferring it to DVD. I was a bit disappointed that this wasn't a Western. it's weird to see Wayne as something other than a cowboy or soldier. He's a playboy in this one, and I am half-convinced there are bits and pieces missing from the film. Certain parts would have made more sense with a few added scenes, anyway. I got the gist, but it certainly felt incomplete. Notably, his post-party sequence late in the film leading to the big fight seems it should have featured more--for instance, the fight.

The film is also pretty sexist in general. Though the female lead has a strong presence and holds her own, the general treatment of women in the film is a bit callous and presumptive in a manner that just oozes paternalist condescension. On top of that, there's no real resolution to the personality defects that make Wallace and his father so objectionable. It's really kinda a bad film, but Wayne's charisma bleeds through all the same.