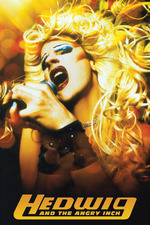 Hedwig and the Angry Inch 2001

What an infuriating film.

I remember the first time I watched this, in a friend's dorm room nearly two decades ago. They knew I'd like the glam rock; they didn't know I was a woman. The song "Wig in a Box" tore me apart inside, touched the edges of the knowledge of myself that I was so afraid of and so desperate to understand and to live. I couldn't explain it then, but the movie felt so powerful to me. And yet, so... wrong.

The themes of identity and gender and sexuality indulged in this film reflect an incomplete understanding of what it means to be trans. They're a reflection of the dialectics of gender theory present over the course of the 20th century that gave birth to our contemporary language. It captures the spirit of discovery, of unearthing the past to reveal the present, in its mythological basis and its obsessive backstory navigation, but it skews far from the realities with a misunderstanding that is drenched in mainstream 20th century views of gender, sexuality, history, and pop culture.

To be trans, especially to have been trans before recent years, was to seek representation like seeking water in a wasteland. We made due with Rocky Horror and egregious punchlines in sitcoms, living in isolated backwaters and repressive suburbs where not even almost-theres like Better Than Chocolate could penetrate. Movies like Hedwig, then, which marry glam rock queerness with a physical intensity of gender and sexuality, an aggressive and edgy drag queen/transsexual goddess blend, and what can best be called unhealthy behavior that permeates too many realities, and in doing so, they get just close enough to feel right to those of us who didn't have Julia Serrrano or Leslie Feinberg in our vocabularies, while being completely wrong.

I may or may not have cried to "Wing in a Box", all alone in my room, on lonely nights in my odyssey between college and transition, my ten years of internal isolation and repression. I wanted not a wig, but the simplicity implied, the transitory power of performance and makeup and sartorial chrysalis. I wanted to be who I was; the song gets that all wrong. But it has an element of transformation to it that appealed to me, that I felt in my bones, that I sobbed to experience.

But it's a distraction from the film's flaws. The power of the music--glam, metal, punk, all the angry faggot music I love--deflected the deeply disturbing elements of the film. Hedwig's Hitler salutes in a restaurant with people wearing kippahs; the outright anti-communist themes (I only, of course, noticed that in this most recent rewatch, as I was not a Marxist until the last five years or so); the abusive behavior Hedwig engages in toward the band (especially Yitzhak); the sexual assaults; the various stereotypes; and the utterly transphobic "Angry Inch" narrative that probably does more damage than good to desperate little eggs like I was.

It's messy, which has a certain amount of resonance to any halfway decent homo in this world, but its messiness is what the less-than-well meaning cis hipsters and gender studies majors and drama geeks and film producing predators all latch onto. This became a cult hit on the exploitation of the lack of representation, the distributors' desire to sell us fucked up carnival mirrors, cis gay artifacts, and some really great fucking songs, outfits, and makeup. In a way, it's good that the representation-starved get access even to these carnival mirrors, but in the last 20 years, we've come so far that this almost seems unnecessary. There's a glam rock tranny musical out there that does it better, I know it. I just have to keep digging til I find it.

But two decades or so later, I still feel it when "Wig in a Box" plays, and I still find the sexual charge in some moments of the film appealing, and I still just want to get back to my freak-faggot world that has been shoved aside during the pandemic. And this film has some of that spirit, even if it is laced with raw anti-communist propaganda and transphobic-even-at-the-time genital-based gender metaphors and, inexplicably, Dar Williams (the early oughts have so many crimes to answer for). The irony of this mocking Rent while being just as privileged and offensive in its own way is quite possibly its best feature.

No trans or queer person out there doesn't have some problematic art, behavior, media, humor, or ideas that were formative to their identity. Hedwig got enough exposure to be that for more than a handful of us, a bump on the road to being ourselves. and so its ugly side is downplayed in my memory. But let's not pretend this isn't venomous in the long run, another cruel portrait that both welcomes and rejects, distorts and deters while it engages and even empowers. We deserve and need better than this. This isn't a call for non-messy representation; this is a call for authentic representation that doesn't attack us as much as reveal us.