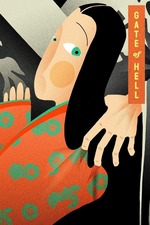 The poster to this is quite possibly my favorite poster on this site. I kinda wish the film were animated like that. The colorful live action I got instead was fine, of course, but a film animated like that poster would possibly rank as perfect based on the visuals alone.

The ability of a character to act is often important to me. Helplessness isn't necessarily a characteristic that will turn me off, but especially when it is applied to non-alpha males, it can suggest something broader and more problematic. This film, then, has an interesting portrayal of a woman in a role that traditionally would not be depicted with agency not only being active in her own fate, but ultimately being a sort of mastermind. What we have here is a woman who is controlled and manipulated by men, used as a prop, and very nearly sold from her own marriage by her husband's lord. She is subjugated. Her devotion to her husband is complicated, it seems, for she is extremely sensitive to her affect on men--she blames herself for Moritou's obsesion with her, for instance--and she fears that she will harm her husband in this way.

Instead of portraying her as a willing or unwilling pawn, instead of turning her into a damsel in distress, instead of suggesting that Moritou's obsession is somehow justified, it shows Kesa work to arrange it so that she can bring about his ruin. What happens is tragic, fucked up in several ways, and ugly, but despite her demeanor, Kesa proves to be intelligent and compassionate in a way that does not reduce her. That's something, at least.