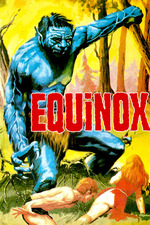 Impressive stop-motion monsters appear out of nowhere in this absurd B-movie, and that alone could elevate it to watchable. But the ridiculous dialogue, bad editing, weird repetition, and constant idiocy in the characters--which should be grating--is so delightfully silly that it's a good time. Nothing the characters do makes much sense, save for a few clever moments (mostly from the villain), and it's incredibly, bluntly sexist. There are so many reasons to hate this movie, but it all sort of meshes together into one long sequence of campy goodness.

It also has impressive effects for such a low budget film. The color filters, the psychedelic light shows, and the aforementioned stop-motion are all really fun. Especially in the alternate dimension with the monks in the red-lit scenes, the filmmakers clearly had some fun graphic design on a shoestring budget. (And speaking of strings, I saw a few attached to models here and there that I probably wasn't intended to notice.)