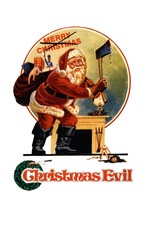 We watched this tonight at my Christmas potluck because it is apparently John Waters' favorite Christmas movie. It's easy to see why. It's awkward in a way that heightens the drama. It's slightly tasteless and wholly campy. It's nonsensical and focused on the sympathetic performance of a man who goes on a violent spree at the same time as he goes out giving gifts to the good children. It has a great soundtrack, too.

Honestly, it's weird to call this a horror film in some ways. It sets things up such that the most sympathetic character is the killer, and you spend most of the time rooting for him on some level. Not, perhaps, to kill, but in a general sort of "I hope he's all right" kind of way. You aren't put in the shoes of his victims; you don't feel horror or terror or any kind of fear. You just feel sad for this man and his emotional trauma and his dark innocence. The performance is surprisingly great. It's not normal. It's not nuanced. It's just great.

The film is a B-movie through and through, so assuming that some of these things are intentional might be a stretch. But the scene where Harry tries to go down a chimney and fails goes on for so long and is played so darkly straight that it feels awkward and intense. There's not really any fear derived; you just feel bad for him. But it goes on for a long, long time, and it's not entirely clear at first what the trouble is. When it does become clear, it just becomes odder. He's on a killing spree, but he's a sadsack. He's pathetic. The film is full of small moments like this, like it's trying for comedy--perhaps cringe comedy--but playing so dark that it creates a new layer of sympathetic misery as well.

And then the ending is just out there.