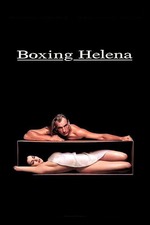 Yes, yes, some of the performances range from wooden to hammy. It can be distracting in a lot of cases, but I didn't particularly mind it here. The lighting makes the whole thing look like a soap opera, and the ending muddles much that came before. Honestly, it all kinda worked for me. Sherilynn Fenn's snarling antagonism at Julian Sands never felt anything but justified; if it went over the top, I was fine with that. The lighting contextualized this as distinctly American media, which, considering the themes, was fitting as well--if this is anything but an indictment of the worst of pathetic chauvinistic obsession, I can't imagine it. And the ending, though it's not perfect, at least excuses a lot of plotholes. Not much to be said to defend the bad pacing of the film, to be honest. That needs some work.

What this film accomplishes well is a depiction of sexist obsession that is not remotely sympathetic. Helena remains powerful even in her most abused state, and Cavanaugh always seems to be a creepy, disgusting, weak worm of a human being. In a way, it's a mistake to go that far with him; it allows men to say "well, I'm not like that" too easily. This is a film that calls out entitled, possessive bullshit with open contempt. If only it could have done so on a more fundamental, universal level, it would have overcome every other flaw.

This isn't an underrated classic or anything, but I rather enjoyed it. I liked what Lynch was trying to do, even if it wasn't perfect.