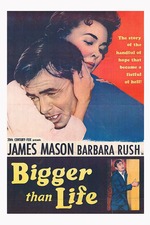 Huge melodrama from Nicholas Ray, this film is absolutely bizarre. I don't know what cortisone really does, other than the fact that it's a steroid, but I can't imagine it's really quite like this. This feels libelous. Not that I give a damn about cortisone, but it just startled me, is all. The whole film is over-the-top, and perhaps that's how they got away with it. It's also vicious.

From education to religion to the patriarchal breadwinner role, everything about the nuclear family is depicted here as poisonous. Ray has nothing but contempt for these institutions, it seems from this film, as he comes very close to stating outright that they are equivalent to psychosis. It's blunt and loud, but it's so intense.

The culmination of all of this is a shift into a dark, horror sequence that is shocking in both its anti-religious edge and brutality. This segues into an ending that has an unspoken darkness in that nothing is truly cleared up. Promises are made, but no real check is placed to keep this whole psychotic episode from actually happening again.