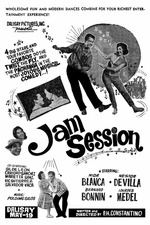 A fun two-hour picnic that I wish didn’t have to end. If you weren’t at least charmed by this, then I’m sorry, there’s something wrong with you.

I initially had my doubts because the script didn’t seem to be demanding anything from Nida Blanca for the first third of the movie, and she was donning the WORST hairstyles and outfits (the over-volumized Jackie O up-do is a travesty). But everything post-their little car outing was so fun, especially Nida and Nestor’s Mango Tree moment in the water. I hate to admit it, but you are no longer my enemy, F.H. Constantino. He seems to have taken all of my complaints about his previous movies to heart and delivered a genuine romcom musical (Yes! There were SEVERAL song and dance sequences this time, not just three! Some absolute hits, some misses, but that’s fine!), and he would dispel so much of my worries (Is this trying too hard to be American? Is Nida going to keep looking like she wants to yeet out of the set?) later during the runtime.

I also liked that this was as much Nestor’s movie as it was Nida’s; they even surpassed their cuteness in Walang Sisihan. A really solid pares-pares musical with lots of rock-and-roll and ardent exaltations of traditional Filipino culture— a funny combination, we’re never going to see shit like that in contemporary Filipino cinema! Anyway, this honestly might be one of the best romcoms I’ve seen so far from this era. I had to pause the movie so many times because I just couldn’t contain my kilig. I apologize to my family who had to put up with me screaming, crying (in joy), and thirsting for several hours.

- This would have been perfect if Leroy Salvador replaced Bernard Bonnin. Salvador was always the best second lead in those films.

- The copy Casa Grande uploaded of this is in such good quality. It was so exciting, being able to see a Nida-Nestor movie without needing to squint or to have your eyes assaulted by the lights flickering all the time.

- The bibingka number, the ending, and the Mango Tree in the water moment... if a smile was not in your face in any of those three scenes, you are HEARTLESS, and you have never known JOY in your life.

- Constantino stopped making everything a static medium shot! Hallelujah! He plays with the camera/editing more in Sandata at Pangako though.

- It's always Nida's face when she dances that gets to me. She's no Rita Hayworth or Ginger Rogers, but she's so expressive. There's so much mischief in her eyes. Her mouth is always open and moving, and there's so much happiness and sincerity in her smile.

- Shirtless!Nestor de Villa, I would very much like to smooch you.