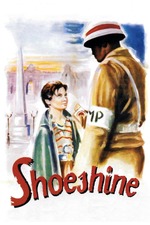 Shoutout to @brucejamesgrant for the request.

Damn, I love Italian neorealism. Vittorio de Sica is more known for Bicycle Thieves and Umberto D, but Shoeshine is another gem of his. Shoeshine contains some of the best child acting I've seen in film, especially from the two leads, Franco Interlenghi and Rinaldo Smordoni.

In the beginning, Giuseppe and Pasquale are young and naïve. Despite living in extreme poverty, the both of them seem to have a positive outlook on life. When Giuseppe's older brother tricks them into committing a crime, Giuseppe and Pasquale are whisked away to kiddo jail. In the jail, the childlike innocence of the kids is tested by the oppressive nature of their environment. Their friendship even gets tested.

Its not as sappy and melodramatic as you'd think. Well, it doesn't get sappy and melodramatic, until the last 5 minutes. If you've seen the film, you know what I mean. There are some aspects to this film that are kinda fun, like the untrained character actors for example. Arcangeli, the sick kid, and the nerd with glasses help make this film shine.

All in all, its an honest portrayal of post-WWII Italy. Despite it being called Shoeshine, there was only one shoe-shining scene in this whole movie. Hmmmm.......interesting.