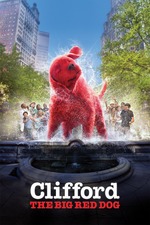 Clifford the Big Red Dog (2021) is a movie where I think I had such low expectations for, that I kind of ended up not hating it. This weirdly could have worked or at least been fine, if it weren’t for a lot of technical issues. Most of the problems for me come from the absolutely atrocious editing and inconsistent pacing. The editing feels like someone didn’t want any of the lines to breathe for even a few seconds. One scene will start and then it’ll instantly cut to the next scene without a conclusion to the previous scene. There’s so many attempted “comedy” moments that have set ups and punchlines. But the actual setup is a split second from the punchline, and it’s pieced together in this really awkward and clunky way that makes the scene fall flat. It’s a shame too, cause there was a few moments where I could see a different edit of this movie where some of the humor worked. The quick editing really messes up the pacing when it comes to the slower scenes too. It moves so quick and doesn’t let you retain the information it’s giving you because it feels like this was edited by someone with severe ADHD since they can’t seem to stay focused.

I usually don’t mention the score in my reviews, but the score they used for this movie consists of the worst possible choices I’ve heard in ages. I hate when movies use certain types of obvious music to tell the audience exactly how to feel. For the most part the movie doesn’t treat the audience like it’s stupid, but when it came to the score, this definitely felt like it. The CG dog is really uncanny to look at, I remember a few months before this movie released and seeing the photo of the red dog-shaped skeleton they used as a reference point for the actors. It was really terrifying to look at and whenever I saw the big CG dog in this movie I just pictured that skeleton. This isn’t necessarily the movie’s fault, but it definitely didn’t look real either way. Part of me wishes they used a real dog, but I’d also rather not have had a real dog go through actual torture to complete a Clifford the Big Red Dog film.

The writing in this movie is absolutely terrible. I noticed it right away with the constant failed jokes. There was some moments where I could sort of see the humor to some of jokes, but I never laughed and ended up physically recoiling at some of them. There’s tons of moments where a character will say something that’s related to the title. There’s a scene where the lead actress is trying to give Clifford a name and it’s incredibly obvious right off the bat that it’s going to be named Clifford, because… well… it’s in the title. There’s plenty of scenes written like that, which successfully got a loud groan of pain multiple times throughout.

I know I mostly trashed this movie, but I definitely didn’t hate it as much as some of the other things I’ve seen this year. I can at least say with this movie that someone behind the scenes tried, even if it was only a little. I could potentially see an okay movie hidden in this mess, but unfortunately we only got this.  I don’t recommend it, but if you want to torture yourself go right ahead. Kids will probably love it or find it really creepy, ENJOY!