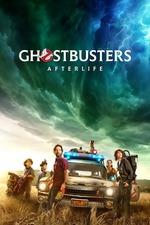 If you don't want to read my thoughts, you can listen to them, along with some of Preston's counterpoints, on our Dan Aykroyd podcast The Best Legs in Chicago. Found here or where ever you find your podcasts:
www.buzzsprout.com/1805196/episodes/9610583

This is a pretty scattershot collection of the thoughts I had as I walked out of the theater. Somehow this film gave me more to think about than most.

There is a scene at the beginning of Afterlife when we’re introduced to the Spengler family. Carrie Coon is a struggling mom who simply doesn’t get, is almost repulsed by, her “neuro-divergent” science-obsessed daughter. “Science isn’t your thing, mom.” She’s told. “What is my thing?” She asks her nerd kid. “Making quesadillas. You make great quesadillas.”

An hour later,  Carrie Coon and Paul Rudd have been possessed by the entities from the first Ghostbusters, known as the “Key Master” and the “Gate Keeper”. Carrie and Paul Rudd have sex, she finally indulges a libidinal desire now that she’s possessed by an evil force. But don’t worry, her kids snap her out of it in the very next scene, pulling her back to reality and reminding her that her only purpose is to be a mom.

For this reason and countless more, Ghostbusters: Afterlife is essentially a conservative film. Ivan Reitman himself is a self-proclaimed conservative, stating in a 2014 interview that the first Ghostbusters was intentionally anti-EPA and government regulation. I had always assumed this was an unintentional result of the collective Reagan-era sub-conscious, but apparently not.

To add to the film’s reactionary gender politics, the daughter, Phoebe, is a reliable female protagonist because she is self-proclaimed no-nonsense, driven by logic. Emotions won’y get in the way of her judgment.

In the same way that massive corporations like Disney are able to mask their military industrial complex propaganda porn by including a gay character every now and then, this film holds up the ecstatic liberal platform that science is the end-all be-all of rational progress. “Science is punk rock!” exclaims Paul Rudd. It’s STEM/tech industry propaganda bolstered by Phoebe’s constant outcastness for being a nerd. It holds up the narrative that anyone interested in science, tech or “smart things” (and smart things only applies to that with empirical evidence on its side, not the subjective world of art) has the world actively working against them. It is the same narrative that gave us Mark Zuckerberg and Elon Musk.

The film tries to have its cake and eat it to by cashing in on small-town Americana charm - a drive in! A Main Street! - but devotes 10 sponsored minutes to a key set piece in a Wal Mart - one of the driving forces that has rendered small town Americana into nothing but the signifier the film is relying on to trick us into feeling some kind of Spielbergian wistfulness. The film is one signifier after another, exploiting the audience’s media-fed associations to pull out the emotional stops that the narrative itself cannot deliver.

And that’s the underpinning for one of the film’s most insidious aspects. At one instance, a bag of marshmallows (on a Wal Mart shelf) rips open as tiny Staypuft Marshmallow men crawl out. In the first Ghostbusters, the show stopping appearance of the giant marshmallow man was the result of the evil entity embodying the one thought Dan Aykroyd (who I still love, Aykroyd innocent) couldn’t fight back. The Staypuft Man is not an entity in and of itself. So how do they appear here, and why? Is the entity of Gozer giving the shoppers of wal-Mart a playful callback to the diagetically real events of 1984? Or are the executives crossing their fingers they can spin off a Minions-level Staypuft Marshmallow Men merchandise empire? The decisions are never plot driven. The entire film is marketing.

Most sinister of all, the appearance of CGI Harold Ramis. I specifically say Harold Ramis here and not Egon Spengler, as his ghostly visage has nothing to do with the deadpan and aloof character from the original films. He is a smiling, helpful and warm entity who helps save the day, hugs his grandchildren and daughter, before dissolving into… stardust? (This is pedantic, but that is not how the laws of ghosts work according to every previous iteration of the world). The stardust forms in a dedication: “For Harold”.

Insanely, this is a mere fraction of my problems with this film, but I need to get on with the rest of my day. But for all of Ghostbusters: Afterlife’s biggest transgression, there is one decision that stands above the rest as reprehensible: