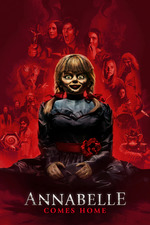 Just the presence of Ed and Lorraine at the start fills the movie with a sense of false comfort because it makes you feel like the rest film will be in good hands.

There’s poor writing and awful characters (especially the friend) who’s motivations and stupid decisions weigh the film down heavily, preventing the movie from ever becoming as smart or clever as it hoped it could be. Also, its bland direction doesn’t make use of the potentially interesting setup.

Also, I’m not sure why but I’ve never found the Annabelle doll to be a very interesting subject to shoot. It just sort of sits there, lifeless, in frame looking like what it is, a movie prop. To me it’s always looked too artificially scary and it’s never been more to me than an ugly frame-filler. It’s no different here.

The scariest part of the film is the pizza that they order. The slice of pizza that it shows is the most disgusting looking piece of pizza I’ve ever seen. I’m 90% it was a piece of pizza that was leftover from the film crew’s lunch weeks prior and they decided to use it in the film instead of getting literally anything else that looks even remotely appetizing.

Also also, the only thing I wanted to see in this movie was Patrick Wilson singing again, and the movie ENDED literal seconds before he was about to. So I’m mad at that too.

CONS
* CGI Werewolf
* The writing/directing
* Plays it way too safe
* Annoying Characters
* That Pizza
* Not enough Warrens
* Projector exorcism
* An ending reminiscent of that found in such films as The Nun or The Curse of La Llorona (aka not good).
* Cutting the film seconds before Patrick Wilson was going to sing again.