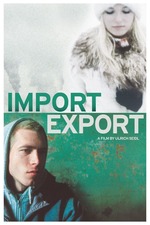 Ulrich Seidl uses his trademark mixture of documentary style film making and fiction to show us the harsh reality of life in Austria and the Ukraine. The film intertwines two stories - that of the Ukranian nurse Olga, who cannot make ends meet and decides to go to Austria after dabbling in Internet pornography, and that of the Austrian guard Pauli, who loses his job after being robbed and humiliated in a parking garage. After moving to Austria, Olga finds work as a housemaid but is dismissed as soon as she starts building up a close relationship with the children of the house. She then finds employment as a cleaning lady in an old people's home, where one of the nurses tells her she should stick to cleaning as Austria only wants nurses who have the proper qualifications (an example of the so-called "diploma culture" as we call it in the Netherlands). At the same time, Pauli is working with his stepfather to move some vending machines from Austria to the Ukraine. His stepfather takes advantage of the situation and, after inciting Pauli to have sex with a Roma prostitute (which Pauli declines), he does nothing but make fun of the locals and humiliate a prostitute he takes to his hotel room.

Seidl is a master of just letting the camera register, and letting the audience do the interpretation. His stories are fictional only insofar as that Seidl and his wife Veronika Franz wrote them, but they might as well have been drawn from real life. Seidl's camera relentlessly registers the incredibly sad and bad things that people are prone to do to each other. In this pessimistic universe, there are glimmers of hope, such as when Olga takes one of the patients down to the basement to dance with him, giving him a moment of bliss just before he dies. There is also hope in Pauli's rejection of his stepfather's suggestions to use his money and power to have sex with whoever he wants (and can pay for) in Slovakia and the Ukraine. These minor, but supremely touching signs of humanity are necessary to retain one's sanity, and to retain even the slightest amount of hope in a dark and cruel world.