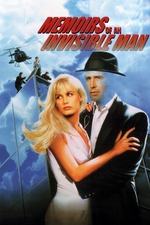 figured I’d be wincing through this but turned out to be a solid Halloween pick that weirdly didn’t bore the kids. Don’t entirely get why Carpenter had so little love for the final product, aside from the apparent hell of having to put up with Chevy during filming. This is squarely in Starman mode, one of my favorite Carpenter modes: an uncool, unabashedly romantic drama mixed with elements of just about every B genre you can think of. All his mannerisms are here, just less overworked. Like the rest of his stuff, looks fantastic, is deeply paranoid and aches with loneliness, I mean most all his signature tropes are loud and proud, but tweaked just enough so they aren’t so flippant.

Could have been made yesterday, though might stand out in that it wasn’t shot indifferently in the suburbs of Atlanta and doesn’t have the sheen of a Chrysler commercial, and is essentially a compendium of all the mid-range genres abandoned two decades ago: noirs, adult sci-fi, romantic dramas, thrillers (espionage, fugitive on the run, conspiracy), I’m sure I’m forgetting some others.

Weirdly autobiographical on the part of Chevy, who had been ushering this along as a pet project for years, his shot at being Cary Grant, and envisioned by him as a way to get at the sadness of the invisible man story, of being a narcissist nobody loves. This is a movie about someone who has no one he can trust, no friends, and shepherded into existence by one of the most notoriously friendless actors in the biz. Goldman apparently turned in a draft or two with a Clark Griswold vibe and walked away, saying “I’m too old and rich for this shit.”

Clearly some wires got crossed: no one needed to see National Lampoon’s Invisible Vacation, and the choice to make this not goofy was the way to go. Putting Chevy at the center seems to have irked everyone, but I can’t think of a more lived-in performance of his outside of Fletch, he basically looks the part of someone who after a decade or so in the spotlight has come to realize that once you strip away all that signature smugness of one-liners and attitude — the definitive vibe of the 80s — all that’s on the other side is nothing.