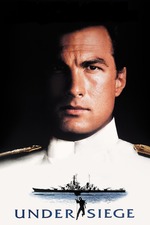 Ah man I miss the days of contained, location based, 90s action movies. The days when you could just do "Die Hard, but X" and it would be a smash hit. Under Siege is Die Hard on a battleship, with a bunch of elements that would be later done much better in "The Rock", which is basically Under Siege on Alcatraz.

I'm a sucker for these kinds of movies about a good guy trapped in a cool location in a tough situation, with even tougher bad guys. The Rock, Speed, Passenger 57, Con Air, Hard Rain, even Crimson Tide and Broken Arrow are kinda part of this Die-Hardish genre of 90s action.

Under Siege gives us Steven Seagal as the lead, Tommy Lee Jones as the big bad, and Erika Eleniak as the love interest. Jones rocks it as the terrorist madman, who is a little more interesting than your routine nutjob. Gary Busey, Glenn Morshower and Colm Meany are around too. Busey has a larger part and is somehow actually pretty good. Seagal isn't exactly a great lead, but his monotone deadpan sensibilities are suited to the script and his character, so it works.

The technical elements are strong, with great lighting from DP Frank Tidy. Davis and Tidy devise some truly mesmerizing angles for the battleship exteriors. A few crane shots are particularly memorable. The sound design is on point, and in fact earned two Oscar nominations.

If like me, you enjoy the halcyon days of 90s die-hard ripoff action, this movie won't disappoint you. The premise is strong, the twists and turns interesting, and the action very solid.