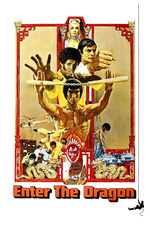 An iconic milestone in both American and international cinema, Enter the Dragon is a transformative movie in the annals of action flicks. It's impossible not to watch this and think of the ripple effects it had through pop culture upon its release. In terms of effects on cinema, this is the Star Wars of Martial Arts films. To think that it premiered only after Bruce Lee's death, is a searing tragedy.

Lee is iconic here, displaying his fighting skills in a way that's still marvelous and impressive despite how far the Martial Arts genre has come. He fights with cool, calm precision, eliminating foes with ruthless efficacy. It's fantastic to watch, Lee lives up to the legend.

Bruce is supported by Karate Champion Jim Kelly, and John Saxon, better known as "The Sheriff" in like a zillion horror films. Lee, Kelly and Saxon all seem to be starring in their own separate films, crossing paths rarely. Lee, infiltrating a secret base is recognizably a spy film, and Kelly, on the run from police harassment, has elements of blaxploitation. Saxon is a gambler on the run from his debts, but sometimes just feels present so the movie has a white guy. He's pretty good in his role, but his plotline isn't half as interesting as Lee's or Kelly's.

Overall the script is the real weak link this movie. A mish-mash of bond-film with the tournament of a sports movie, it never really quite comes together. I found the goofy plotting and absurdly evil villain to be more cartoonishly fun than annoying, but I was never into this movie for the plot. The script is a hashed-together excuse to get the fighters together.

Which is fine, because two-time Oscar nominated director Robert Clouse knows how to bring the action. Stylish, fast moving fights are edited with clarity and purpose. Clouse's camera loves the fighters, and helpfully lets them do their thing instead of getting in the way. Clouse would go on to another film with Jim Kelly, finish Lee's Game of Death after his passing, and direct Jackie Chan's first American action film, the Big Brawl. He's not a much talked about director, but he had a huge impact on Hollywood Martial Arts films.

Enter The Dragon doesn't much succeed on the point of plot, but develops great characters and allows them to be in terrific action sequences. I don't think I love it as much as many of the films that followed it, but it's very fun and earned it's place in history.