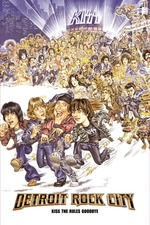 I caught this movie when it hit video back in high school. I was not a KISS fan before, and I was not a KISS fan after. They are a band that somehow just never grabbed me. I love theatrics, I love hard rock, and I think that was even before I knew that Gene Simmons is such a shit. I think at the time was too deep into Mindless Self Indulgence and stuff like that.

Anyway, while a KISS concert is the focus of the movie, and while their songs make up a sizable chunk of the soundtrack, it's more than anything a movie about teenage rebellion and recklessness, desire and attaining that desire at any cost.

The main characters are not prettied up for the movie. They are as ugly teenage boys, and by that I mean that they are selfish, unkempt, unscrupulous, incendiary. It didn't occur to me when I was the same age, because I was in the thick of that time of my life as well. I was running off to concerts, drinking, taking drugs, trying to get laid, stealing things, fucking up at school. I probably would have "shook my pee-pee" at Shannon Tweed, probably after vomiting. They say that youth is wasted on the young, and it's too true. But I'm really glad I had a teenage boy's mind then instead of now. I could get into a lot more trouble with that kind of mind now.

I love teen movies that are also adventure movies, of a sort. Quests that aren't just for sex. Treks across country, getting into trouble, evading law and lawless in turn. This movie is a ton of fun, without painting the teenage boys as anything better than what they are. The 20 years between my first and recent viewing make it seem like two different people watched it. Time and age gave me more to appreciate this time around. I might even be softening on KISS. There are three other band members, after all.