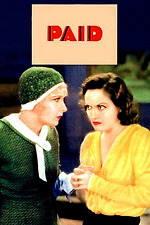 Joan Crawford apparently considered Paid to be her first proper acting role, and with good cause. She acts everyone else off the screen and looks sensational. Her first appearance as a haggard shopgirl wrongly accused of theft is something to behold, the wide whites of her eyes transfixing.

Crawford progresses from prison drab to gowns by Adrian, and when she is on screen the film breathes. Unfortunately the latter half involving a heist and police procedural have her absent for long stretches, and the film sags badly. Her close shave with prostitution is very pre-Code, though her reticence to be a kept woman has Robert Armstrong chiding her: "Don't be so 1890s!"

Bob, nobody was more 20th Century than Joan Crawford.