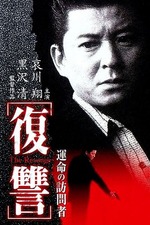 The Revenge: A Visit from Fate is a mean-spirited cop drama that revels in genre convention, dragging itself through an ever cascading, and ever grimmer, series of mostly predictable plot beats. But, rather than formulaic, its genre classicism gives it its uniqueness.
There's a relentlessness to the economical storytelling that makes the film feel more like a hideous doomsday clock counting down to zero than a simple procession of cliches.
Kiyoshi uses the film's tight adherence to the conventions of genre storytelling to create an oppressive, constricting sense of inevitability.

It's pure pulp, but it's executed with a grotesque cold-bloodedness by one of Japan's master craftsmen of genre cinema.

The only thing it really lacks is the extreme, operatic violence present in Kiyoshi's other revenge thrillers.
It's not bloodless, but certain scenes feel like they're leading up to a cathartic bloodiness, then cut away at the last second—this feels budgetary, not stylistic.

Other than that, though, The Revenge is a film that knows exactly what it's doing and does it perfectly.
The budget is extremely low, but Kiyoshi's mastery makes that almost entirely irrelevant. The camerawork is perfectly elegant, and ever so slightly off-kilter. And Kiyoshi's trademark thick, dead, nihilistic malaise hovers over the entire thing.
Sho Aikawa also provides even more evidence that he's one of Japan's greatest living actors—as if more evidence was needed.

The Revenge: A Visit from Fate is far from Kiyoshi's best, but it's still a masterfully told revenge story that deserves a far wider viewership.