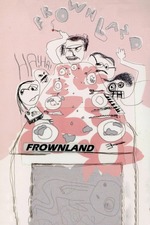 Ronald Bronstein met Dore Mann—the nonprofessional actor who would end up incarnating the unhinged, stammering pariah at the center of his debut feature—at a funeral. “He introduced himself to me as my cousin,” Bronstein remembered, “which wasn’t quite true.” But they were indeed distant relatives, and Mann committed to Frownland with ferocious intensity, plunging himself into the role of this self-described “troll” who lives with an arrogant roommate in a wretched Brooklyn apartment and sells disability benefit coupons door-to-door. Shot with a tiny crew and a ragtag style on 16mm, Frownland seemed utterly unlike anything else when it premiered at South by Southwest. It was a dispatch from a bleak but rivetingly energetic corner of the world. And Bronstein’s attachment to troublesome social misfits hasn’t waned since; he co-wrote the Safdie Brothers’ Good Time, for which Frownland in retrospect seems like an important predecessor.

Film at Lincoln Center is using Letterboxd to share updates and lists with their audience. Join here.