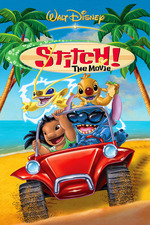 Quickie Review (Part of The Disney Binge-a-Thon)
After swinging through the Bukuvu with someone pretending to be George of the Jungle, The Disney Binge-a-Thon takes a trip to America’s little island with this direct-to-video follow-up to 2002’s Lilo & Stitch that serves as the feature-length pilot episode of the TV series spin-off that aired on Disney Channel & ABC for 2 seasons. Reformed alien Experiment 626 or Stitch (Chris Sanders) and his creators Jumba (David Ogden Stiers) & Pleakley (Kevin McDonald) are enjoying life in Hawaii with Lilo (Daveigh Chase) & Nani (Tia Carrere) with the precocious Lilo teaching the little blue alien about unity and how everyone on the little island is “ohana”. Soon, Stitch will learn this lesson in a big way when he learns that there are 625 other experiments that Jumba has in his possession in dehydrated form and the evil Dr. Hämsterviel (Jeff Bennett) wants them all for his own nefarious means so he sends the ruthless Captain Gantu (Kevin Michael Richardson) to retrieve the capsule containing the experiments. However, with the help of Jumba, Pleakley, Lilo & the tough but kind Cobra Bubbles (Ving Rhames), Snitch will stop Gantu & Hämsterviel’s plans and rescue his many, many “cousins”. I was expecting this to be just another dull, uninteresting direct-to-video attempt at turning another one of their movies into a TV series (see Atlantis: Milo’s Return as an example) but I have watched the series that this spun off from 15 years ago and it’s a fun show and this is a fun movie. The animation is not on the same level as the original movie due to being produced by Disney’s TV animation division and the story suffers from some issues but the original film’s blend of comedy, science fiction, adventure and heartwarming family story is intact in this movie and is all the more watchable for it. However, I’m not done with these two yet as they have 2 more adventures on Netflix that needs watching. But will they be as enjoyable as this one? Stay tuned!