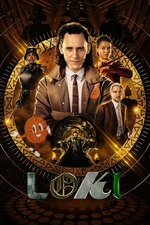 my final BIG review for this show.

yass:
- the visuals were breathtaking… just excellent
- the loki and sylvie dynamic was very cute and before y’all start your shit… ‘selfcest’ isn’t REAL. please get a grip.
- all the characters are so interesting and getting into their stories are so fun…
- ramona renslayer was an excellent.. i want to say anti-hero?
- the kang setup was actually well done. very surprised.
- that half point belongs to TARA STRONG as miss minutes my queen!

eh:
- sylvie felt more like the main character than loki but that’s my girl so i’m not really complaining..

absolutely not:
- way too much dialogue i felt like i was watching a fucking podcast
- if this is set in avengers 1 (2012) minutes right after loki lost and was STILL A VILLAIN.. why would he have the personality of loki in ragnarok without any of the development?
- TERRIBLE, emphasis on TERRIBLE writing. like just horrendous.
- it felt like it was made just to setup the second season and the new movies like we definitely lost the plot we was going for in episode one..

i do like this entire series better than falcon and the winter solider but that’s not saying much due to my strong hatred for that series all around. the finale… was the best out of 3. kang setup really saved it from total shittyness. i’m excited to see season 2 but i really hope they get some new writers.

+ like loki way more than i did before watching this. sylvie my favorite sorry i have to go with team gaslight gatekeep girlboss!