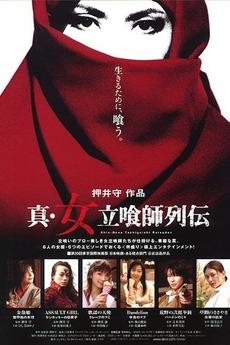 The Women of Fast Food

"Tachiguishi", that is to say, grifters who make it their profession to "eat-and-run", was created by the world-famous filmmaker, Mamoru Oshii. In 2006, he directed "Tachigui -- the Amazing Lives of the Fast Food Grifters", a feature film which was made using a new technique called superlive-mation. It combined fact and fiction to tell daring stories of professional grifters, leaving viewers with a feeling of nostalgia for the Showa era. Following that, another movie has been completed. This new live-action film, "Eat and Run - 6 Beautiful Grifters" was made with the objective of filming its main actresses as beautifully as possible. The film is made up of six episodes directed by six different directors who rose to the challenge, two of whom are Oshii himself.