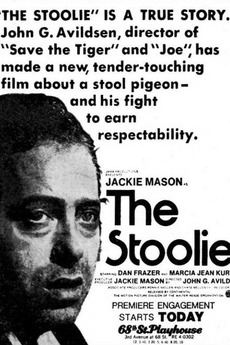 "THE STOOLIE" IS A TRUE STORY. John G. Avildsen, director of "Save the Tiger" and "Joe", has made a new tender-touching film about a stool pigeon - and his fight to earn respectability.

Roger Pitman is a petty thief who makes a deal with the police to use bait money to trap other criminals. But when he gets the cash, Roger can't resist the temptation and steals part of it. He runs off to Miami Beach, but now lives in fear of the crooks that he set up as well as the police.

Gangster movies have captivated me ever since I was a child, growing up in the 70's, and watched both them…