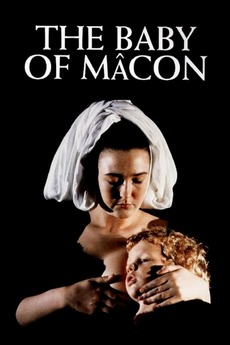 The Baby of Mâcon
JustWatch

The Baby of Mâcon

Set halfway through the 17th century, Greenaway's film follows a church play performed for the benefit of the young aristocrat Cosimo (Lacey). In the play, a grotesque old woman gives birth to a beautiful baby boy. The child's older sister (Ormond) is quick to exploit the situation, selling blessings from the baby, and even claiming she's the true mother by virgin birth. However, when she attempts to seduce the bishop's son (Fiennes), the Church exacts a terrible revenge.