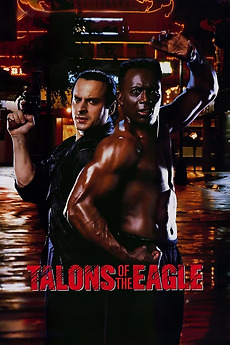 Talons of the Eagle
JustWatch

Talons of the Eagle

When fighting crime, killing is a way of life.

After 3 DEA agents are killed by crime boss Mr. Li (Hong), the DEA reluctantly calls in New York cop and martial arts expert Tyler Wilson (Blanks) and sends him undercover on assignment to Toronto to team up with Canadian vice cop Michael Reeds (Merhi). Wilson and Reeds must infiltrate Li's gang, so enter a martial arts tournament that Mr Li is known to attend to recruit talent.

"Toad style is immensely strong and immune to nearly any weapon. When it's properly used it's almost invincible."

A collection of Canadian exploitation and B movies mentioned on Paul Corupe's awesome Canuxploitation! web site.

Canadian Bacon: The Maple Syrup of the Soul

There are only three true genres. The Good. The Bad. And the Canadian.

These are Canadian. The beautiful. The strange.…

Nothing Beats Quality... (The Next 700 Episodes of Best of the Worst)

The Giant Rubber Monster arrived on Earth in the year 2047 A.D. Doctor Madness discovered the radioactive comet and tried…