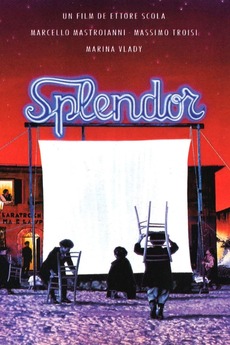 Splendor is the name of an old movie theater managed by Jordan (Mastroianni), who inherited it from his father. The theater is in decay and only generates debts and trouble, but Jordan gets aid in his almost quixotian quest from projectionist Luigi (Troisi) and ushurette Chantale (Vlady). However, Jordan is finally forced to sell the Splendor to businessman Lo Fazio (Piperno), which plans to transform it in some kind of furniture store. When Jordan leaves the theater for the last time (the very first scene), he recalls the glorious days of Splendor and movies in general.

Films that have played in the main competition in the Cannes Film Festival (since 1950).

Even though I don’t rewatch my favorite movies as often as I used to, (because whenever I miss them, I…

Movies in which movie characters watch other movies (and sometimes tv shows).

Cinemas / Movie Theaters in Films, People at the Movies, Film in Film

Enjoy my collection of movies with scenes in a cinema / movie theater. Or scenes outside a cinema, where characters…