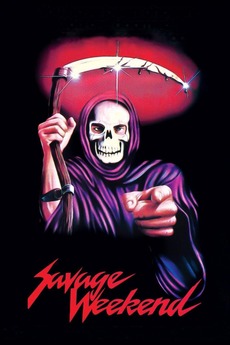 You have been chosen. You are doomed. Prepare for.... SAVAGE WEEKEND

Several couples head upstate to the country to watch a boat being built. Unfortunately they are stalked by a murderer behind a ghoulish mask.

The Killer Behind the Mask, The Upstate Murders