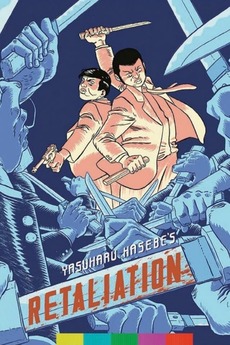 Two years before they collaborated on the immortal Stray Cat Rock series, director Yasuharu Hasebe and soon-to-be-superstar Meiko Kaji teamed up for this potent gangster flick that also stars the great Joe Shishido (Branded to Kill) and Akira Kobayashi, who would shortly thereafter star in Kinji Fukasaku's epic yakuza series Battles Without Honor and Humanity. Emerging from a stint in prison, yakuza lieutenant Sumukawa (Kobayashi) discovers that his gang has disintegrated while he was in the pen. An ambitious type, he quickly hooks up with another gang (led by Shishido) who promise him a prominent position if he helps them deal with a rival family. But bonds are made to be broken, and pledges of loyalty soon give way to competition, betrayal and — naturally — retaliation. Tough, cynical and violent, Retaliation cheerfully overturns romanticized notions of underworld honour, paving the way for Fukusaku's revisionist yakuza pictures of the 1970s.

Films covered by the GGTMC podcast

The Gentlemen's Guide to Midnite Cinema is a podcast discussing all films genre related; covering everything from horror to Wuxia,…

Top 100 Yakuza Films As Rated By The Letterboxd Community

I've tried to keep it to purely Japanese produced films.