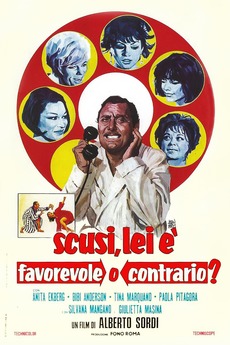 Pardon, Are You for or Against?
JustWatch

Pardon, Are You for or Against?

A successful fifty-year-old entrepreneur, Tullio Conforti, opposed to divorce for religious reasons, is in fact separated from his wife and leads a frenetic life divided between numerous lovers.

The rather arbitrary world of 4K releases

Italian sex comedy films from 1954 until today compiled in one list from these:

The Awesomeness That Is Dardano Sacchetti

You know who Fulci, Argento, Lenzi, Deodato and Bava are, do you know who Dardano Sacchetti is? He is a…

NOTE: THIS IS NOT MY LIST NOR DESCRIPTION! I have made a copy for myself in case the original ever…